The easy answer is no. Monday was a full +20 above average in the greater Hartford area which is an impressive departure for normal. The month as a whole so far is +3.1 in metro Hartford which is nothing to sneeze at either.

To figure out if it will stay this much above average we have to look back and see why it has been so warm.

The 500mb height anomalies show substantial negative departures over Alaska and the Pacific Northwest. Ugly if you like cold and snow in New England. This -PNA/+EPO combination is in general a very warm pattern for the northeast. Inversely, across Alaska, this has been a record cold pattern!

In addition to the cold vortex that’s been spinning near Alaska the stratosphere has become exceptionally cold over the Arctic.

Up in the stratosphere the polar night jet has gone berserk with a powerful polar vortex. This +AO configuration effectively will mean no sustained high latitude blocking for the foreseeable future. We will need some type of stratospheric warming (possible later in the winter – a SSW?) or some other mechanism (like Rossby wave train breaking) to break up this vortex. Until that happens it will be a challenge to get sustained cold and wintry weather in the northeast unless the Pacific cooperates.

You can see the high latitude blocking with an impressive -NAO that brought the record snow into southern New England for nearly 2 months last year.

So where do we go from here? Winter lovers will have some reason to rejoice heading into December as it appears our substantially above normal weather pattern will be changing to something more average.

Finally we’re beginning to see some improvement in our computer models for those who like snow and cold. Ridging is showing up in the PNA region and some ridging over Alaska to help flip the EPO and bring some cold out of northern Canada. Since we can’t rely on blocking in the North Atlantic seeing changes out in the Pacific are important.

Although many of these features appear to be transient this is a reversal from the sustained warmth we’ve been having. We’re getting there. I expect the Day 6-10 (Dec 5-9) and Day 11-15 (Dec 10-14) to average near normal with some transient bouts of below (maybe even much below) normal temperatures.

As for snow chances it doesn’t appear like Connecticut will see anything significant through December 10. It’s possible after that point we become a bit more wintry. The good news for skiers is that there may be several snow chances across northern New England over the next 1-2 weeks which, when combined with colder temperatures, should help boosting the base.

2 shots of colder than normal weather are heading to New England with a substantial warm up in between. Here’s the GFS MOS forecast for Windsor Locks over the next couple days. It looks reasonable to me and blends pretty well with the other computer models.

The average low/high for today is 32/50 so you can see the next 3 days will be a couple degrees below normal and then we see a pretty substantial warm up by Tuesday and Wednesday.

Across ski country in the Berkshires and Green Mountains the chill will be even more impressive with temperatures in the higher elevations struggling out of the 30s in Saturday, below freezing all day Sunday, and overnight lows in the teens. With low relative humidity and light winds on Sunday it should be fantastic snow making weather during the second part of the weekend and through the first half of Monday. 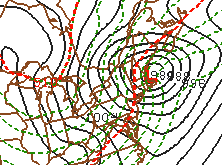 Obviously the 2-3 day surge of warmer air after this weekend won’t be pretty on the slopes. Even with some rain likely as well the pay off could be sweet. Today’s 12z GFS (valid 18z Thanksgiving) develops a very impressive nor’easter that straddles the coast of southern New England.  For most areas in southern New England away from the coast this could produce a quick inch or two of snow or sleet followed by rain. Up in the Green Mountains, however, a track like this could produce a wintry mix and decent snowfall totals.

Before you get too excited, however, other models aren’t nearly as wintry. The European model keeps the storm much further west (which is much warmer) before the storm can redevelop off the New England coast. Still, there is a signal for some snow or sleet in the higher elevations of Vermont on Thanksgiving even with the “warmer” solution.

If you have travel plans on Thanksgiving try to keep posted on this forecast. If you have ski plans after Thanksgiving cross your fingers because you may be in luck. Even if the natural stuff doesn’t wind up falling on Turkey Day the weather following Thursday should be the coldest so far this season with some great snow making days.